The Great Seal of Iowa 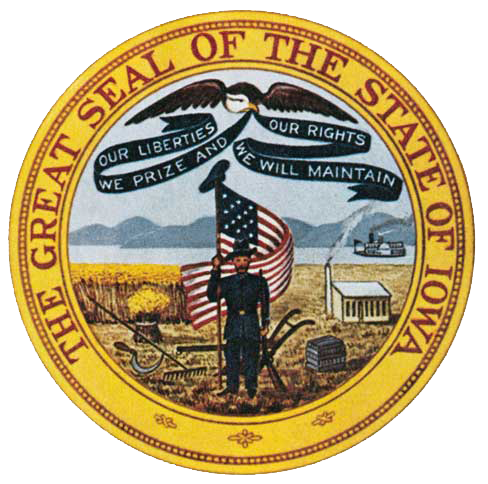 One of the initial acts of the first General Assembly in 1847 was to create the Great Seal of Iowa.

The two-inch diameter seal pictures a citizen soldier standing in a wheat field, surrounded by farming and industrial tools, with the Mississippi River in the background. An eagle is overhead holding in its beak a scroll bearing the state motto: "Our liberties we prize, and our rights we will maintain." The motto was the work of a three-member Senate committee and was incorporated into the design of the seal at their suggestion.

The Great Seal cannot be used without the permission of the governor. The state seal is retained in the custody of and under the control of the governor, who uses the seal for official documents and functions.

Graphics of the state symbols were provided by the Dept. of Economic Development, Division of Tourism.